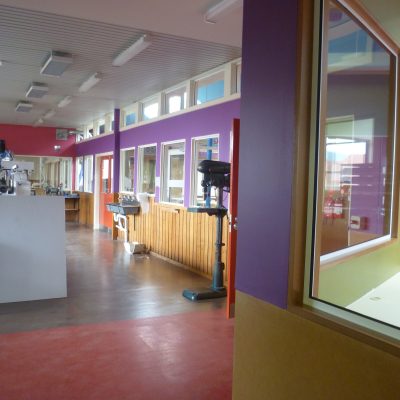 CDC Development won the tender for the refurbishment of the Manual Arts Building at New Norfolk High School in a competitive tender let by The Department of Education in December 2013.  The cost of the redevelopment was less than $300k.  The project formed part of the State Government initiative to stimulate the economy and was part of the $15m statewide education facility upgrade budget.

The project parameters included a restricted time frame, including the Christmas break for the completion of the project prior to the commencement of the new school year.  It was a requirement that the project be completed within a six week period.

The internal layout of the building, comprising 14 rooms and 590m2 was modified to allow for the changing needs of New Norfolk High School.  The internal walls were substantially demolished and a new layout which allowed for more flexibility in terms of classroom requirements and substantial improvements to adjacent rooms by soundproofing of adjoining walls and ceilings.

The restricted time frame made for a complex programme of works.  The need to complete works on a room by room basis so each trade was given as much time as possible to complete their work prior to the next trade starting was a challenge both for the trades involved and the on site management of the project.

The substantial joinery requirements required an early return to work after Christmas, the manufacture, delivery and installation of all joinery was required within a short space of time.  Pre ordering of glass from Mainland suppliers added more complexity to a project initiated three days before Christmas day.

A decision by the Education Department to replace all existing woodworking and metalwork machines further enhanced the new facilities.

The success of the project was testament to good cooperation and communication on site and with the design team.